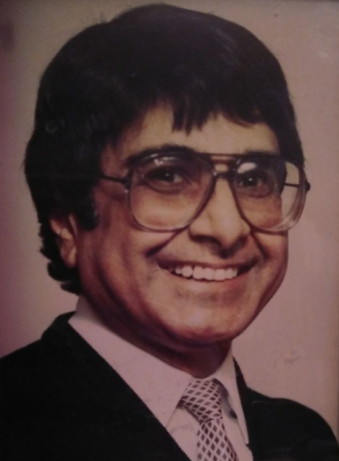 Haider Dhanani lived a life of service.  With a profound dedication to bridging cultural differences and to the well-being, settlement and upward mobility of newly arrived immigrants to Canada, Haider made a significant impact on Canada’s civil society.

Dhanani was born in Tanzania, East Africa in 1939. He and his wife, Fatima and their two-year old daughter left Tanzania in 1972 following the general nationalization program in Tanzania in the early 70’s and the expulsion of South Asians from Uganda.   A graduate of the University of Southampton and an accountant by profession, he and Fatima initially settled in Vancouver and later moved to Calgary to pursue business opportunities in 1976 where their son, Aleem was born shortly after.

His dedication to serve was highly influenced by the guidance of His Highness the Aga Khan, hereditary Imam and leader of the culturally diverse Ismaili Muslim community living in more than 25 countries. Through the Aga Khan’s guidance, the Ismaili community embodies a commitment to the attainment and sharing of knowledge to enable the betterment of self and society, bridge-building to foster peace, understanding and pluralism, and contribution of time, talent and material resources to improve the quality of life of the communities within which it exists.  Haider fostered these principles in Alberta’s social fabric through his work, which continues to serve as an inspiration to those leaders who have carried on his legacy.

Dhanani was one of the early pioneer leaders of the Ismaili Muslim community in Canada, which grew rapidly after the expulsion of South Asians from Uganda.  He brought a sense of belonging to the community, hope and vision, and worked to build strong institutional capacity that continues to serve as foundation for the community’s progress today.  Equally important, he championed the community’s integration into Canada’s social fabric, breaking down barriers and fostering a common understanding and celebration of diversity at a time when immigrants faced challenges as new Canadians.  In the words of Jim Dinning, “Haider was a teacher, who took people under his wing. To show them – through word and deed – a side of the world they were all too unfamiliar with.  His devotion to duty was simply the price he paid to be here – to be Canadian. He gave so much because he had so much to give.  So he did it.”

Haider Dhanani’s commitment to advancing community development was in harmony with his professional life as an entrepreneur.  During his 20 years in Calgary, Haider held a number of leadership positions including President of the Ismaili Council for the Prairies; Member, Aga Khan Foundation Canada National Committee; Chairman, Refugee Settlement Committee, Ismaili Council for Canada; Chairman, Immigration and Settlement Services, Government of Alberta; and Member on the Federal Board for Visible Minorities, Canada, to name a few.

Thanks to Dhanani’s resolve and leaders who he inspired to ensure the community thrived, the Ismailis began to flourish as it lived out the ethical principles of Islam and became known for their contribution to Canadian cultural, social and economic landscape.  Today, the Ismaili Muslim Community and the Aga Khan Development Network enjoy a long standing partnership  with the Canadian and Provincial governments in the areas of civil society, pluralism, arts and culture, parks and recreations and international social, cultural and economic development.  As a recognition of this relationship and the community’s progress in Canada, the Canadian government bestowed Honorary Canadian citizenship to the Aga Khan in 2009.

In the words of Al Duerr, the then Mayor of the City of Calgary, “Haider had an overriding belief that supporting his fellow man, helping everyone grow and prosper to the best of their ability, was not just a calling but an obligation. He was one of the early leaders in the important bridge building across many cultures and faiths that was beginning to take shape in Calgary and Alberta at the time.  Through his gentle yet strong persuasiveness, he became a role model for community leaders that came after him, both within the Ismaili community and in other multi-cultural communities in Calgary.”

On December 19, 1990, Haider Dhanani passed away at the early age of 51, leaving behind his wife Fatima and two children.  Dhanani’s impact on Alberta, and indeed Canada, was evident with an outpouring of over 3,500 people in attendance at his funeral, including members from all levels of Government and leaders from Calgary’s multi-cultural and faith communities.

One of Dhanani’s greatest passions was his love for family.  Haider Dhanani’s wife Fatima continues to operate Bri-Mor Properties, a business he established in 1989, to carry out his professional ambition. Today, Bri-Mor Developments is a full-scale real estate development and asset management firm operated by his son, Aleem and wife, Fatima.  Dhanani’s family continues to live in the spirit of service espoused by him.