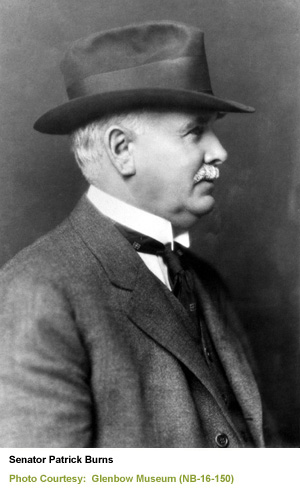 Patrick Burns was born in Oshawa, Ontario as the fourth of eleven children, where he grew up with little education in humble conditions.

Pat Burns headed out west with his brother John in 1878, at the age of 22. When they arrived in Winnipeg, they chose a homestead near Minnedosa and the two set off on foot for a 250-kilometre trek to claim their land. After they arrived, they didn’t have any equipment to work their newly acquired land, so they returned to Winnipeg and found jobs building the Canadian Pacific Railway.

Burns homesteaded in Manitoba for a while but gradually became involved in buying cattle and selling meat. Eventually, he ended up in Calgary where he set up a small slaughterhouse. The construction of the Canadian Pacific Railway proved a boom to him, as he obtained the contract to supply meat to feed the workers. His business grew rapidly to include meatpacking, the retail meat trade, wholesale fruits and provisions, creameries, cheese factories, dairy farms, ranches, mining and oil.

Pat Burns travelled widely to find suppliers, and was known across Canada for his good-natured humility. By 1912, Burns was running six large cattle ranches and he became one of Alberta’s Big Four ranchers. Later that year, the Big Four financed the first Calgary Stampede, which was wildly successful.

Burns’ ranches were so sizeable that he could travel from Cochrane to the Montana border without setting foot off his own land. However, his businesses did encounter challenges, such as having his Calgary processing plant burn twice, and losing hundreds of cattle to the harsh winter in 1917. In 1928, he sold the meatpacking and related businesses for $15 million and focused his attention on his true love – ranching.

His impact on the development of Western Canada was recognized by then Prime Minister R.B. Bennett, who in 1931, on Burns’ 75th birthday, appointed him to the Senate. Prime Minister Bennett had this to say about him: “Holding your wealth as a trust, you have given generously to every good cause and your life has been an inspiration to the younger generation.”

Throughout his career, Burns was known for his caring and compassion. He was one of the first to provide aid to the survivors of the Frank Slide. He was also a strong supporter of local children’s charities, as well as the community activities of the Catholic Church. Burns focused his philanthropy on causes for children because he recognized that they are the most vulnerable in times of struggle.

As a significant part of his philanthropic legacy, he endowed what is now the Burns Memorial Fund with a third of his estate. This fund continues to this day to direct funds to disadvantaged local youth, as well as families of police officers and firefighters.

In 2008, Senator Burns was named Alberta’s Greatest Citizen, as part of an initiative marking The Calgary Herald’s 125th anniversary.